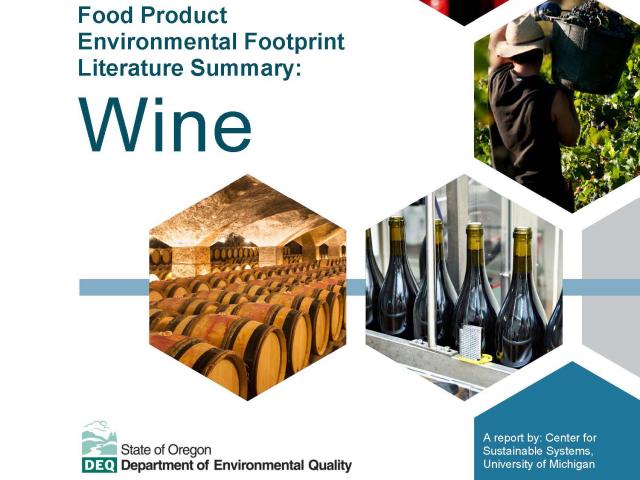 A new report has been released to show the environmental footprint of wine. Performed by the Center for Sustainable Systems at the University of Michigan and released by the Oregon Department of Environmental Quality, this report can help winegrowers make decisions that will reduce their environmental impact.

Wine, like anything we consume, requires natural resources and generates environmental emissions, and therefore, understanding the processes that contribute the most impact can aid in efforts to reduce our overall footprint. Oregon is both a significant producer and consumer of wine. Oregon’s more than 27,000 acres of vineyards are spread across 18 designated wine growing areas and produced 78,000 tons of wine grapes in 2014, placing it at #10 in dollar value among Oregon’s agricultural commodities, and making Oregon the 4th ranked wine producer nationally. According to the Oregon Consumption Based Greenhouse Gas Emissions Inventory for 2014, producing and supplying all wine consumed by Oregonians (not including restaurant sales) contributed an estimated 84,500 metric tons CO2 equivalents annually. That’s equivalent to about 17,800 average passenger vehicles operated for a year.

This summary highlights results from life cycle assessment (LCA) studies of the life cycle of wine production depicted above. Such studies, while not specific to wineries in the Pacific Northwest, can help viticulturists, vintners and wine drinkers focus efforts on activities that can have the greatest reduction on the environmental footprint of wine production.